I always enjoy sharing with you about the adventures that God allows me to go on with Him in the nations. In May, I traveled to Norway to visit and build relationships with our Norwegian family in Oslo & Bergen. In Bergen, I spoke in the house of prayer called Bergen on Fire. I also had several meetings with leaders to build more relationships. After Bergen, I flew to Stavanger to speak in a spirit-filled Lutheran church. Two meetings were set up for me there, each meeting had an attendance of 200 people. I also felt so privileged to preach on Sunday morning in front of the Lutheran church in Norway. I spoke about the power of travailing prayer. In the evening meeting, I shared about the place of Israel in the great commission. Norway has been like another home where God has had me minister many times in the past 5 years. 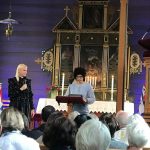 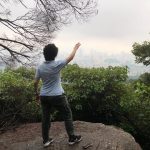 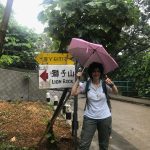 At the end of July, I traveled to Hong Kong to be a part of the Global Gathering with Watchmen for the Nations and to support our Chinese family in the strategic timing in the history of the Chinese church. The theme of this gathering was from the oneness Jesus prayed for in John 17. There were around 7,000-8,000 people who attended the gatherings. Before that we were in a smaller gathering with leaders from around the world, to pray and seek the Lord’s heart for what He is wanted to do in the main gathering. I was invited to speak in a home church before the gatherings began. It was a wonderful time of fellowship, sharing with a group of 20 people, where we saw God move in the meeting with creative healing miracles. I experienced ten healing miracles that night! All the glory and the honor to Jesus!

Before leaving for Hong Kong, the Lord showed me a vision of the lion roaring over Hong Kong on a high mountain. To my surprise, through research, I found out that there was a real mountain in Hong Kong by the name of Lion Rock. After sharing the vision with some of our Chinese friends, we felt to pray about going up this mountain, so we could have our boots on the ground and pray. When I arrived, one of my good Chinese friends felt to climb with me on Lion Rock. It was quite a challenging journey, as Hong Kong is very hot and humid. Graciously the Lord sent us splashes of rain to cool us so we were able to make it. We reached a point on Lion Rock where there was a view that overlooked the whole city of Hong Kong. We had a very powerful time of declaration and prayer with my Chinese friend and her husband. We felt it was an assignment for a kairos time in Hong Kong. During this time the protests in the streets of Hong Kong were still happening and continuing to escalate. We knew that the Lord had sent us to unite with His heart and proclaim heaven on earth as well as the releasing of the angelic hosts to fight the battle for Hong Kong’s destiny in this season. After the prayer assignment on the mountain was ended we began the gatherings. During the gathering, we saw the Lord demonstrating through the Holy Spirit the roar of the lion of the tribe of Judah. As you’ll see in the photo below, there were even signs in the heavens to confirm what has been released on earth.

I also had the privilege of sharing for a few minutes in the main gathering to thousands of Chinese a prophetic word and a vision where I saw a big teardrop coming from heaven becoming like a river of life flowing down over China and from there to the nations proclaiming Revelation 22:1-2.

Towards the end of my trip to Hong Kong, I experienced twenty-one healing miracles, and at least fifteen of them were creative miracles. I am so grateful for all the Lord has done and to all of you who are standing with us and support us to be able to go to the nations. Due to the length of this newsletter, I will send a separate newsletter to share prophetic visions and experiences I had while in Hong Kong. 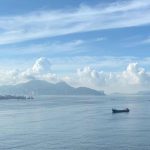