This is a vision that I had while taking part in the Global Communion at Christchurch, Jerusalem. Jews, Arabs and internationals had come together for this event during Passover 2022.

During worship, as we were exalting the Lord, I saw a vision of a door opened in heaven and the cloud of witnesses appeared from this open portal in the spirit. Then I noticed two angels appeared on either side of this door, one was on the right and the other on the left, each had a cup in his hand that looked like a bowl. I saw that the cups/bowls began to overflow with a substance, the first cup was overflowing with blood and the second with water. All of a sudden the angels took the two cups and began to pour them out over the land of Jerusalem in particular. Then, as the two ingredients mingled together, I noticed that they became golden oil that was being poured out onto the land, and then a fountain began to flow from the ground of Jerusalem that was flowing with oil. The oil began to flow through the streets of Jerusalem, and went on throughout the land of Israel and to the nations!heard also in my spirit the verse from Zechariah 13:1-2:

“On that day a fountain will be opened to the house of David and the inhabitants of Jerusalem, to cleanse them from sin and impurity. “On that day, I will banish the names of the idols from the land, and they will be remembered no more,” declares the Lord Almighty. “I will remove both the prophets and the spirit of impurity from the land.”

“This is the one who came by water and blood—Jesus Christ. He did not come by water only, but by water and blood. And it is the Spirit who testifies, because the Spirit is the truth. For there are three that testify:  the[ Spirit, the water and the blood; and the three are in agreement.  We accept human testimony, but God’s testimony is greater because it is the testimony of God, which he has given about his Son. Whoever believes in the Son of God accepts this testimony. Whoever does not believe God has made him out to be a liar, because they have not believed the testimony God has given about his Son.  And this is the testimony: God has given us eternal life, and this life is in his Son. Whoever has the Son has life; whoever does not have the Son of God does not have life.” 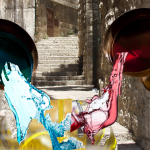