During a time of worship and prayer at our HOPE youth meeting, I (Rania) was taken into a vision. I saw the Lord Jesus as a lion and He began to roar from Zion – Jerusalem. When He roared, I saw heaven open and seven huge angels were released from heaven. Each angel held a big fiery sword in his hand. They were sent as warring angels to make war with a creature that was currently over the region of the Middle East.

As I was looking to see where they were sent, I saw a huge octopus with its tentacles spreading out towards seven nations. The nations were: Russia, Ukraine, Iran, Syria, Iraq, Lebanon and Turkey. Then I saw the angels bringing their swords together in unison. This created a huge united sword that was set on fire. As they headed towards the target, I heard in my spirit that the target was the head of the octopus. In order to eliminate the tentacles, the head must first be the target to destroy the octopus’ activity.

When the angels hit the head of the octopus, its tentacles began to shrink back and die. As these tentacles were shrinking and dying, a shaking was taking place in the nations that the tentacles had been spread out towards, and thus it shook the foundations of the evil systems within them. The Kingdom of Light and the power of the Holy Spirit began to invade and a clash of kingdoms –  of light with darkness – began to take place. This was how the vision ended. 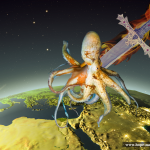 After receiving this vision I pondered on it for more than a week. During the following week, a friend came to visit me and I sensed that I should share the vision with him. After  I finishing speaking, he pointed out that he had just watched a video that shared news for watchmen about Israel and the Middle East called “Watchmen Newscast.” That broadcast was released the day before I received the vision on the 8th of June. The description of that broadcast is: “The alleged strikes target a factory for developing Iranian weapons and trigger the ominous echo of the prophet Isaiah. Plus, Iran places its crosshairs on Tel Aviv and Haifa and issues a dire warning. And what is Israel’s “Octopus Strategy?” Watch now on the Watchman Newscast!”

Please unite with us in prayer for this strategic time of war as the Lion of the Tribe of Judah roars over the octopus to dismantle its deceptive schemes!

Joel 3:16
The Lord will roar from Zion  and thunder from Jerusalem; the earth and the heavens will tremble. But the Lord will be a refuge for his people,
a stronghold for the people of Israel.