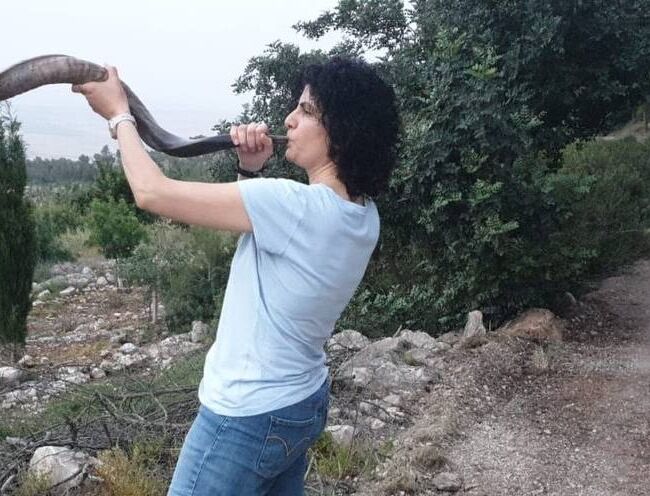 Rania went with several Jewish sisters to Mount Gilboa, continuing the prophetic journeys to the seven mountains of Israel started in response to a vision in December 2018. 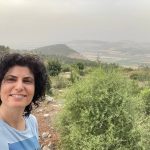 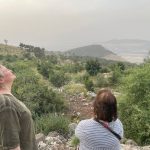 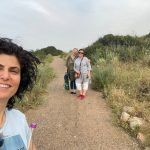 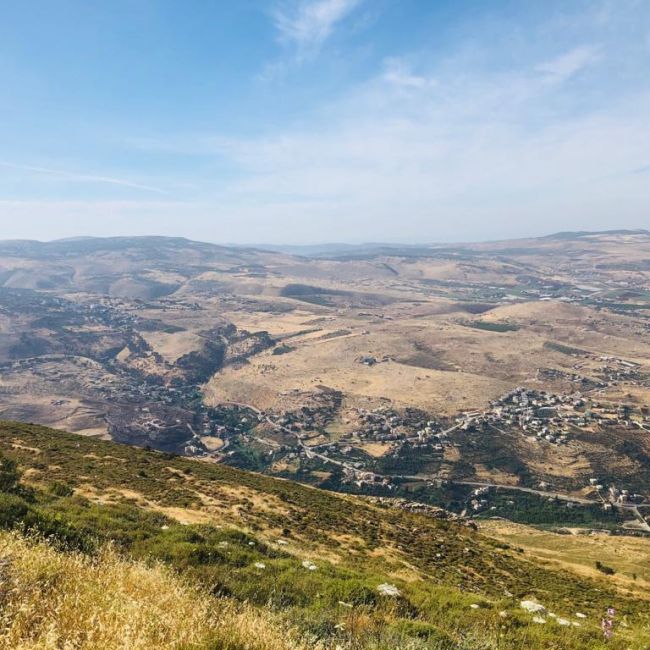 Continuing the journey to the seven mountains of Israel, six Jewish and Arab women traveled to Mount Kabir in the region of Elon Moreh. Mount Kabir is 745m above sea level and to the north-east of Shechem. This mountain is surrounded by Mount Ebal and Mount Gerizim, the mountains from which the tribes of Israel were instructed to pronounce blessings and curses in Deuteronomy 27. This was a continuation of the journey that had begun in 2019, following God’s prophetic word to Rania (7 Mountains Vision).

Mount Kabir has a view overlooking the river of Tirzah. Tirzah was one of the five daughters of Zelophehad who received an inheritance in Israel (Numbers 27). We prayed over Shechem and the entire region, asking God to release blessings from Mount Gerizim. We asked God for the harvest in this area and for an outpouring of the Holy Spirit – our visit was a few days before Pentecost.

We took communion together and declared that the Lord would remove any curse of bloodshed over the land and replace it with a blessing from both Jew and Arab. That morning, I, Rania had been awakened at 4:44 am. I understood that the Lord was asking me to declare the return of his glory from the northern gate:

“Then the man brought me by way of the north gate to the front of the temple. I looked and saw the glory of the Lord filling the temple of the Lord, and I fell facedown.”

“For I will pour water on the thirsty land, and streams on the dry ground;

I will pour out my Spirit on your offspring, and my blessing on your descendants. 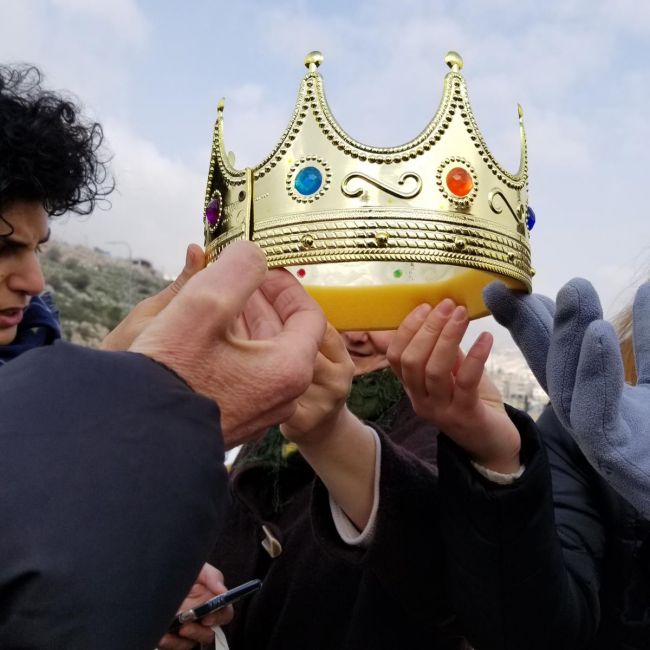 On March 15th, seven women – three Arabs, three Jews and an English Gentile –  came together for a prayer journey to Mount Hermon in the North of Israel. Our purpose was to continue the journey to the seven mountains of Israel that had begun in 2019, following God’s prophetic word to Rania (7 Mountains Vision). The 5th and highest mountain, Mount Hermon was yet to be accomplished.
During this time of the global coronavirus (COVID-19), we felt it was important to visit the highest mountain in Israel. The name corona comes from the Latin for the word crown, thus we were led to go to the highest place in Israel and crown Jesus as King over the land of Israel and all the nations of the earth.
“Behold, how good and how pleasant it is for brethren to dwell together in unity! It is like the precious oil upon the head, running down on the beard, the beard of Aaron, running down on the edge of his garments. It is like the dew of Hermon, descending upon the mountains of Zion; For there the Lord commanded the blessing— life forevermore.”

First we came together and broke bread. The Lord had told me to blow a shofar and to arrive before 2.22pm. So we prepared our hearts to reach the top of Mount Hermon about half an hour beforehand and then blew the shofar at 2.22pm. See video below.

[Since the beginning of the year, God had been speaking to me about the numbers 222. For example, Revelation 22:2 where the river of life flows. God had told me to blow the shofar and declare over the highest mountain that the Lord will release His dew and the waters of life to clean and heal our land.]

We also took with us the prophetic elements of water, oil, salt, bread and wine.

We stood and prayed and interceded. With the shofar blowing, we declared:

We repented for divisions in the church, unforgiveness and racism. As Arabs, Jews and Gentiles together, we began to ask the Lord to heal the land. We repented for lukewarmness in the church and declared our love for the land, pledging allegiance to the Lord. We repented for the evil alliances between governments which had allowed a plague to come. We prayed for a deeper unity and that the Lord would shake the evil thrones as He is now doing and instead establish His kingdom which will rule over these governments. We prayed for righteous alliances between nations, that God’s throne will be established in these governments and founded on righteousness, truth and justice.

“I was watching in the night visions, and behold, One like the Son of Man, coming with the clouds of heaven! He came to the Ancient of Days, and they brought Him near before Him. Then to Him was given dominion and glory and a kingdom, that all peoples, nations, and languages should serve Him. His dominion is an everlasting dominion, which shall not pass away, And His kingdom the one which shall not be destroyed.”

In a prophetic act, we took the crown and crowned the LORD over the highest mountain and declared Daniel 7: 9-13 & 21-28. As we held up the crown, the clouds parted in the sky above us and the sun shone.

We prayed for the healing of the land, for a release of the river of healing over governments and over the coronavirus. God had spoken to me beforehand to bring a specific bottle of oil that had been given to me in 2019. So I took this oil which is in a glass bottle shaped like a crown that had been a gift from a Jewish sister and was made according to the recipe in Exodus 30. Then, to my amazement, one of the Jewish sisters there with me explained the meaning of the name of the giver of the oil – her name is Tal Aharoni. Aharoni comes from the name Aaron, from the priestly tribe and Tal means dew (Psalm 133).

We poured the oil and the wine on the ground and sprinkled the salt as preservation and a reminder of God’s covenant. We built an altar to the Lord. 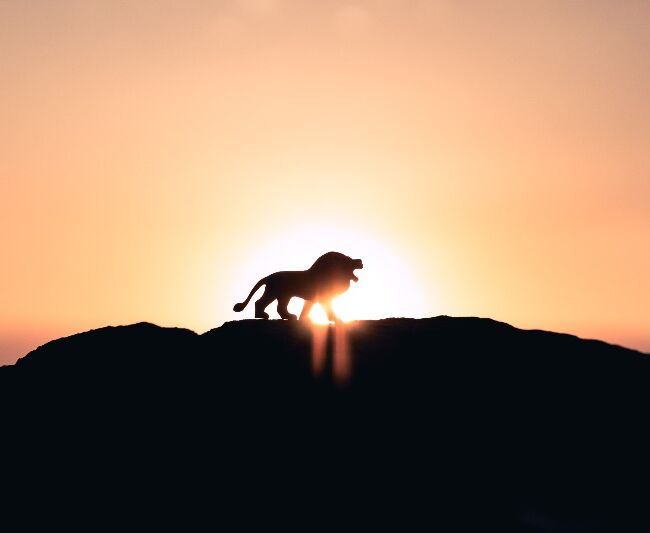 “The Lord roars from Zion, and utters his voice from Jerusalem, and the heavens and the earthquake. But the Lord is a refuge to his people, a stronghold to the people of Israel.”

At the end of our 40 days of fasting that we began on November 11th, and ended December 21st, I saw a vision in our Friday night youth meeting.

These are the mountains I feel the Lord has been highlighting to me to go and pray on:

I’ve shared the vision with two Jewish women & another Arab woman. The four of us will go to these mountains to pray, to partner with the Lord in prayer and intercession, and to do the prophetic acts He leads us to do. We will see these candlesticks lit up again! The Lord showed me He is about to restore and take back the high places of Israel.

When a lion roars, one of the major things that happens is a shaking that the vibration of his sound creates. It says in Joel 3:16 when the Lord roars there will be shakings and earthquakes. Also, when a lion roars he is claiming back his property and declaring the borders of his dominion. When the Lion of the Tribe of Judah roars, He is declaring victory over His enemies and releasing fear and trembling in the camps of the enemies.

The Lord has highlighted to us Ezekiel 6 and 36 when Ezekiel prophecies over the mountains of Israel. The Lord is asking His people to turnaround and return to Him with all their hearts. This turning will cause idols to fall first from the hearts of His people, Israel, and then the Lord will be able to take back the mountains. On top of the mountains, often times sacrifices to idols took place. The Lord is wanting to deal with the sin of idolatry, compromise, and complacency amongst His people. He is wanting to take back the high places so that His Name and His Name alone will be lifted up over the nation of Israel.

The candlesticks represent the seven spirits of God on the menorah which is the work and move of the Holy Spirit. The menorah is the symbol of the nation of Israel, and He wants to light up the candles on this menorah again. An enlightenment of the hearts of the people of the land is coming, and the people of this land are going to see their Messiah. He is the only way, the truth, and the light. I believe that God wants to bring a great harvest of Jewish and Arab souls this year. As the Lion roars, He proclaims that no one will touch His people and that they belong to him and him alone!